Miserably cold and wet with a biting wind, he suggested we walked through the bush to escape the elements.

The dog was keen with the bush idea.

So he led and I followed.

I don’t know for sure what happened…

But suddenly the track was no track at all and the wet clay soil was showing it’s more unforgiving nature. The dog didn’t mind. She just zipped under this and lept over that making her own merry way.

Son made some rude quips about pay-backs for times I had led them astray in the bush when they were little kids. Breaking the cardinal rule of not leaving the track, etc. Incredible how they can have the memory of an elephant on some occasions yet forget in a nano second when asking them to do the dishes!

Pushing aside bushes and broken branches he was such a gentleman making sure none of them flew back at me coming behind.

At each slippery rise he offered a hand to help me up and make sure I didn’t slip.

If only his daddy could see him following his example so finely…this culture he had instilled in his children. He would have been real proud. I was 🙂

Grateful for a son who can have fun with his mother but looks after her too.

(just quietly, I was grateful that he found the way out) 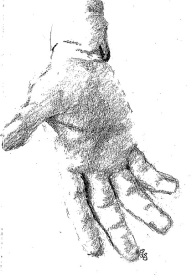 So much fun having a plein air afternoon with some buddies. I've been wanting to paint.this scene for 6 years and FINALLY did it. Thanks to my friend, Susan, for the freshly baked scones and jam. Week 3 at this exercise and i think there's improvement...but the best thing is just being out with good friends indulging in all things art. Thx @tauponana and @claire.dyer.520 #pleinairartist #urbansketching #urbansketchingtaupo #farmscenes #oiloncanvasboard #sconesandjam #goodfriendsmakelifebetter💕 #lyndasymonsartistry #lyndasymons