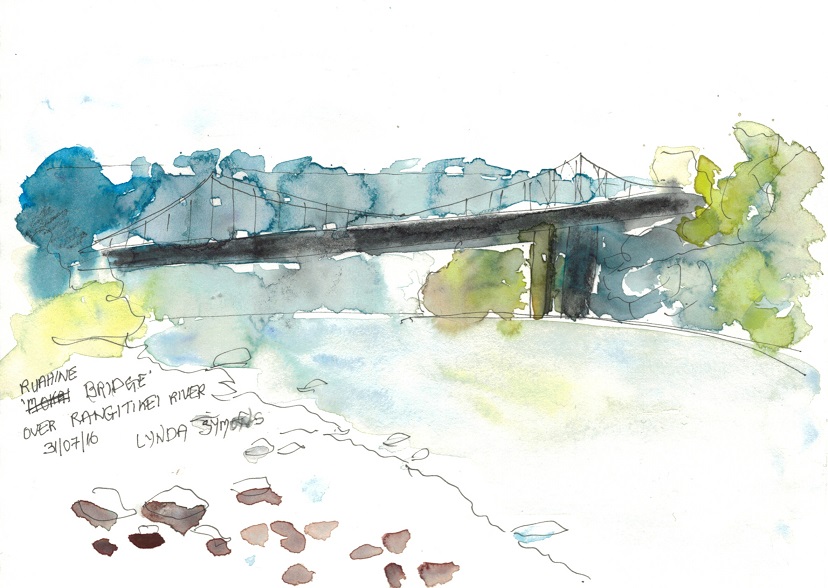 Clever daughter had been giving me photography lessons.

“Sit on the rocks and use your knees as a tripod,” she had been telling me. “You get great movement shots of the water.”

It had seemed such a long way down to the ground after all our sitting in the car that I declined the offer for now and tucked the advise away for another day.

Perched on her rock she stayed there for a time while I wandered off to photograph other ‘higher up’ things … like the bridge than ran over the Rangitikei River just beyond us.

The wind whipping down between the high clay cliffs was biting around the edges of my jacket so I finally opted for the car again. Reluctantly she joined me.

With the wind on the outside we began looking back through the photographs just shot.

It wasn’t like an earthquake noise that comes like a train getting closer and then ebbs away. Instead, although a similar noise level, it was suddenly just there and all enveloping. In a moment of time my brain was flooded with all sorts of thoughts…’was there a truck behind us? No,  we are at the end of the road. What’s happening? Earthquake? No, wrong noise. And then as I was looking this way and that trying to source the huge rumble I spotted it.

We had been enjoying the river right on a U-shaped bend and thus the sound was bouncing and finding us from every direction. But directly opposite on the other side, a large portion of the clay banks had come tumbling down meeting with the river. With all the rain over the last few weeks it was really not surprising. There was hardly anything to hold those extremely high cliffs together.

Wow, that was an unexpected adventure for the day.

Although we were totally safe on the other side we decided we had had enough of that adventure and began moving back towards the main road. I would like to go back and explore this amazing river some other time though. …Fascinating!