Mind wandering as I drove to today’s destination I replayed my Mum telling me “He was doing a little wiggle, all excited that he could fit into one of his old shirts,”.  She was so excited for his success. And why not be excited when you have worked hard to loose some weight.?! I am proud of my brother for taking up the challenge of his health. A little voice…ok, maybe not so little…tells me I should take a leaf out of his book and follow his example. I retort with a million excuses well rehearsed and then choose to concentrate on the drive ahead.

Coming round the corner I have to smile as I pull up behind a very large tractor on a truck marked “Over-Sized” which took up a full lane and maybe a bit more. That’s a bit pointed after my daydreaming! Lights flashing and two pilot vehicles in front. Winding round the edge of Lake Taupo with all of it’s 25kph hairpin corners and cliff edges into the lake below was a real breath taking experience. Especially when another over-sized vehicle came the other way. Both vehicles had to reduce to a crawl. Pilot vehicles from both trucks radioing into their respective drivers on both sides of the road. With hardly an inch to spare anywhere, rock face on one side and cliff drop on the other, they slowly crept passed each other and I am sure, like me watching from behind, they all let out a collective sigh of relief when they had finished that manoeuvre.

At least that passing was managed as opposed to a few bends later when a car carrier trailer came faster than any truck should towards us and had us all pumping adrenalin through our systems and expecting to see St. Peter in a flash. Watching from right behind was quite surreal. Thankfully, MOST drivers slowed down and pulled over. There is only so much drama we need in one drive.

Concentrating so much on the scenes unfolding right in front of me, I almost missed our turn off. Today we were doing the Waipehi Walk through the Moturere Reserve for our #360in365. The brochure said it was a 1-1.5 hr easy walk with great views out to Motutaiko Island. They were right about the views. Just stunning! At one point the path runs along a ledge on a rock face and we sat perched above the traffic below looking across Jellicoe Point all the way back to a hazy Mt. Tauhara in the distance.

Not too sure about the easy walk bit though. It might have been fine in summer but all the rain of late on a dirt track had sent it to slimy mud beneath a layer of slippery leaves. There were a few near ‘whoops-a -daisy” moments for us all. And with it being so slippery underfoot the hills seemed even harder to scale and descend.

One of us decided to stay at one end and be picked up later rather than try and retrace the path. So that she didn’t have to wait too long we set off at the best scramble pace we could. My ticker was doing a workout in no time. The dogs were loving this faster pace. No problems with their tickers. They were having a blast.

I decided that I could tick the box for exercise today. and as I don’t want to heave more than I have to up these hills on future visits …we have to carry our painting gear, etc, as well…I also decided to stop making excuses and join my brother in reducing the ‘Over-size’. It’s time. Hopefully, when I see him in July we can do a happy wiggle dance together 😛 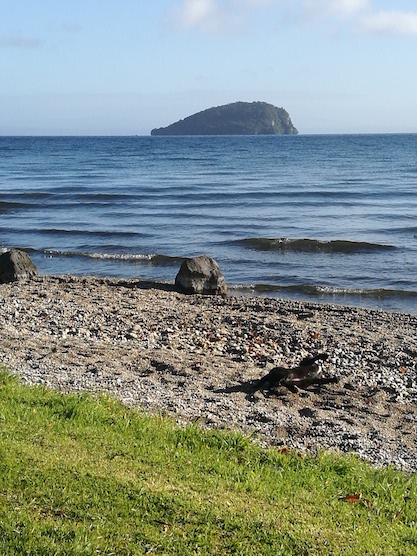