A special day was dawning so in the dark  we all gathered outside waiting to be welcomed in. The call went out and slowly the crowd moved through. We filed along with them expectant. Ipads and camera flashes illuminating the dark along with fire drums emitting both light and heat. The drone overhead capturing the moments for everyone. Such a variety of people…plenty of colour amidst the sea of black clothes.

I was amazed standing in the line outside as to how many people reached up and touched the carving over the door. Inside was even more so. Admiration abounding for  the artwork and carvings with lots of ooh’s and aahs and affectionate touching of the works. Imagine going into the Louvre and touching the paintings? It wouldn’t be allowed and yet here it was pretty standard practice. A tactile people, maybe? 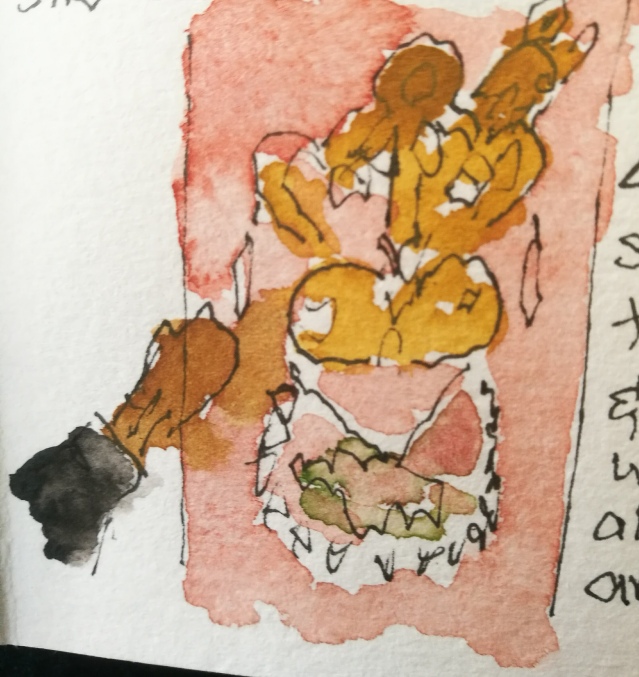 Finding a corner out of the road of the masses I had a go at capturing the scene in front of me. I may have no reason to come back here and I want to remember the insides well. Panels interspersed the woven walls with a panel for Ratana and another in the centre top. A big carved statue was on the floor in the middle.  A simple design, but very effective.

People gathered outside and through the wharekai (Foodhouse or kitchen). SO many catchups and conversations. People greeting each other with the traditional hongi and a kiss. There were soooo many scenes and interesting people that I would have loved to sketch but I need to do more work on honing my ‘fast’ skills…30 seconds or less is a pretty hard call.

After breakfast at the local community hall there was a Haka Powhiri.  Good, loud and fierce. Then inside again for speeches and song.  After a few speeches, a man in a blue suit stood and began to sing. A beautiful voice and right on key. Many joined him and some with harmonies. Then after he had spoken the Ratana Brass Band played a hymn very tastefully.

For a little Pakeha (white) girl who grew up with virtually no Maori contact, I am constantly surprised on our return to the Land of the Long White Cloud, at how strong the Maori culture is now. Although English was spoken today, the Maori language was much more prevalent. I heard parents talking to their kids in Maori, greetings in Maori… ‘morena’ is my new word for the day…speeches and singing totally in Maori. They have a respect for the elderly common to the Aboriginal and Torres Strait Islanders we previously lived with.  Today was an opportunity to show respect to my fellow Waitahanui community. …to give them honour. May they enjoy their new marae.

#Grateful for this opportunity

← Kindness in Rotorua
Hasn’t it Been A While →

Families, one is coming, one is going, emotions are all over the show, big highs, big lows, but so grateful for the gift of life. Psalm 90:12 says “Teach us to realise the brevity of life, so we may grow in wisdom”. Life is i deed brief. It seems like just yesterday that the photo reference for this sketch was taken. Actually, that baby is about to have her own baby girl any day now. How time flies when you are busy with living. #grateful for this opportunity to stop and reflect amidst all the goings on. #family #grandma #baby #death #birth #dailygratefuldrawings #pencilsketch #lyndasymonsartistry